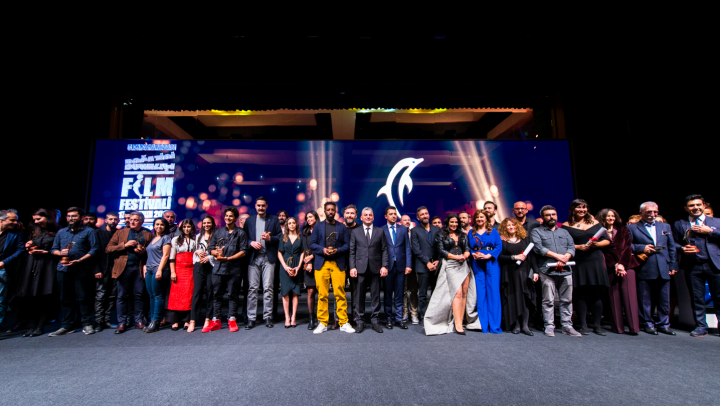 Celebrating its fifth anniversary, the winners of International Bosphorus Film Festival has been announced! At the closing ceremony held on November 26, the Grand Prize was awarded to “The Guest” by Andaç Haznedaroğlu at the national, and to “Malaria” by Parviz Shahbazi at the international competition. Hungarian filmmaker Béla Tarr, who came to Istanbul as the festival’s Guest of Honor has been presented with Lifetime Achievement Award at the ceremony that hosted numerous political, filmmaking and media personages.

The first award of the ceremony was presented to the Hungarian filmmaker Béla Tarr, who came to Istanbul as the festival’s Guest of Honor. This year’s owner of the Lifetime Achievement Award, the master director received his award from Ömer Arısoy; the Counsellor of Republic of Turkey Ministry of Culture and Tourism. Emphasizing his pleasure for visiting Istanbul, said he, “When you step at the set at 4am in the morning, you find coldness everywhere. But you have to hold straight your perspective and should be aware that one day you will receive this warm award.”

Grand Prize for the National Cinema given to ‘The Guest’!

Chaired by Derviş Zaim, and composed of members; Ayfer Tunç, Aylin Zoi Tinel, Feza Çaldıran and Aslı Tandoğan, National Feature Film Competition Jury has evaluated 8 films this year. “The Guest” by Andaç Haznedaroğlu won Best Film and Best Editing (Ahmet Hafez, Can Yağan) awards; and Pelin Esmer was selected as the Best Director with her film “Something Useful”. Selman Kılıçaslan won Best Screenplay Award with “All Felicities are Possible”, Marton Miklauzic won Best Cinematography Award with “Yellow Heat”. And Öykü Karayel was selected as Best Actress with “Something Useful”, and Cezmi Baskın as Best Actor with his performance in “Murtaza”.

International awards given to the Iranian filmmakers

International Bosphorus Film Festival’s Short Fiction Film Competition Jury, composed of filmmakers Asja Krsmanović, Gözde Kural and Hakkı Kurtuluş, selected “Happiness” by Necip Çağhan Özdemir for the national, and “Retouch” by Kaveh Mazaheri for the international competition. And Short Documentary Film Jury, composed of filmmakers Aysim Türkmen, Kerime Şenyücel and Mohammed Almughanni, selected “The Edge of Menderes” by Mehmet Can Mıcık at the national, and “Grandfather’s Father” by Karlis Lesins at the international competition as the Best Short Documentary.

Massive support from the festival for the national film industry!

A total of 15 projects vied at Pitching and Work in Progress categories of Bosphorus Film Lab realized by 5th International Bosphorus Film Festival with the institutional partnership of TRT.

Composed of filmmakers Halil Kardaş, Susana Poveda and Mehmet Eryılmaz, Work in Progress jury presented Ministry of Culture and Tourism Special Award worth 25,000 TL to “The Pigeon” by Banu Sıvacı, and the winner of Digiflame Post-Production Support Award in this category has been “Muhammed Ali” by Ümit Köreken and Nursen Çetin Köreken.

Organized by International Bosphorus Cinema Association and Istanbul Media Academy, International Bosphorus Film Festival has hosted plenty of renowned filmmakers including Béla Tarr, Aida Begic, Bobby Roth, Majid Majidi and presented the Istanbulite cinephiles a 10-day period abundant with cinema with a programme of 107 films; including 43 features and 64 shorts from 39 countries ranging from Brazil to India, Iran to Kirghizia.

We present our acknowledgements to our sponsors…

5th Bosphorus International Film Festival would like to thank Ministry of Culture and Tourism, General Directorate of Cinema, Ministry of Youth and Sports, Turkish Airlines, Istanbul Metropolitan Municipality, The Union of the Municipalities of the Bosphorus, Anadolu Agency and TAV Airports as the main sponsors; to TRT as the institutional partner; to 24 TV, Habertürk TV and NTV as the television sponsors, to Habertürk and Star as the newspaper sponsors, to RABARBA as the magazine sponsor; to NTV Radio and Radyo Voyage as the radio sponsors; and to Artfulliving, Beyazperde, Cineritüel, Film Hafızası, Öteki Sinema, Sadibey and Sinefesto as the digital media sponsors.