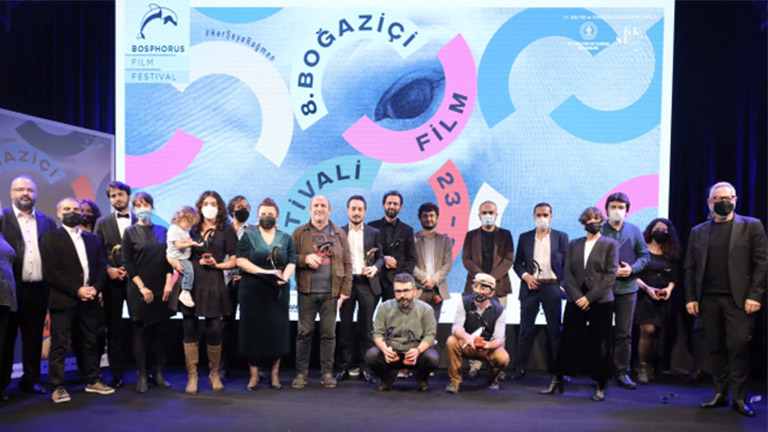 "Golden Dolphins" were granted at the 8th Bosphorus Film Festival

Having hosted the cinephiles in accordance with the social distancing rules in the movie theatres between October 23-30 with the slogan #AgainstAllOdds; at 8th Bosphorus Film Festival’s award ceremony held in the evening of October 30, winners of Golden Dolphin have been announced.

Organized by Bosphorus Culture & Art Foundation with the contribution of Republic of Turkey Ministry of Culture and Tourism, General Directorate of Cinema, and support of Global Communication Partner; Anadolu Agency, 8th Bosphorus Film Festival – held between October 23 and 30 - was concluded with the award ceremony held tonight (October 30) at Feriye movie theatre. “Kumbara” directed by Ferit Karol has been selected as the Best Film at the National Feature Competition, winning the Golden Dolphin Award worth 100,000 TL. And at the International Feature Competition, Svetla Tsotsorkova’s “Sister” has been selected as the Best Film. In addition, the winning projects of Bosphorus Film Lab have also been announced. The ceremony has been presented by Elif Bereketli.

Bringing to the Istanbulite cinephiles the outstanding latest productions, this year a total of 60 films from 30 countries have been showcased. Film crews, invited guests and press members attended the award ceremony that was organized in compliance with the pandemic rules. Opening speech of the night was made by Bosphorus Film Festival Artistic Director Emrah Kilic. Having started his speech by saying “We could not have realized the festival if wasn’t for you”, Kilic mentioned that it was very important for them to make a physical festival edition and they succeeded in realizing one. Thanking the jury members who have watched and judged the films and to the cinephiles who have filled the halls, Kilic also acknowledged all the sponsors for their moral and financial support and particularly Republic of Turkey Ministry of Culture and Tourism and TRT. “I would also like to thank my festival team. It is very precious for us that in such delicate conditions, they have done all they could have in the organization of the festival,” said Kilic and noted that they are going to support the festivals and movie theatres. Emphasizing that they have realized the festival in extremely challenging conditions and pandemic continues to have a profound effect on the film industry, Kilic expressed his wish to see altogether the films at liberty in movie theatres in the earliest time.

Best National Film of the Year is “Kumbara / Penny Bank”

Chaired by the writer, scriptwriter and producer Tarik Tufan, and composed of members; director Ramin Matin, cinematographer Taner Tokgoz, actress Ipek Turktan Kaynak and actress Ecem Uzun; National Feature Film Competition Jury has selected “Kumbara / Penny Bank” directed by Ferit Karol as the best national film of the year. Having received his award from Tarik Tufan, Ferit Karol said ”It had taken eight years to write the script. And I would like to thank everyone who have supported me throughout the process, and especially my crew.”

Winning the Golden Dolphin Award worth 100,000 TL, “Kumbara / Penny Bank” also brought the Best Screenplay Award to Ferit Karol, Best Female Actor Award to Gulcin Kultur Sahin and Best Male Actor Award to Murat Kilic. After receiving her award, Gulcin Kultur Sahin said “I would like to thank especially to the jury members, and to my director Ferit Karol and my acting partner Murat Kilic. And after receiving Best Male Actor Award, Murat Kilic said “I owe this award not only to my performance, but also to our interaction with Gulcin. We all stayed at home for a long while, and our greatest occupation was to watch movies. Hence, filmmakers were much needed in this period.” Best Director Award has been presented to Erdem Tepegoz for his film “Gölgeler İçinde / In the Shadows”. After receiving his award, Tepegoz said “These awards encourage me to make good films. I would like to thank the jury members for their decision.” And Best Cinematography Award went to Hayk Kirakosyan with “Golgeler Icinde / In the Shadows”. And Jury Special Award went to Mavzer / Mauser directed by Fatih Ozcan who said “This film would not be made if it wasn’t for the stories my mother and father had told me in the long winter nights. I would like to present my heartfelt gratitude especially to them, and also to my crew.” And Firat Terzioglu won Best Editing Award with the film “Gelincik / Weasel”.

And Fatih Ozcan, director of “Mavzer / Mauser” was granted by the jury members of Film Directors Association; Mehmet Eryilmaz, Melisa Onel and Selim Evci with FILM-YON Best Director Award that is granted for the first time this year.