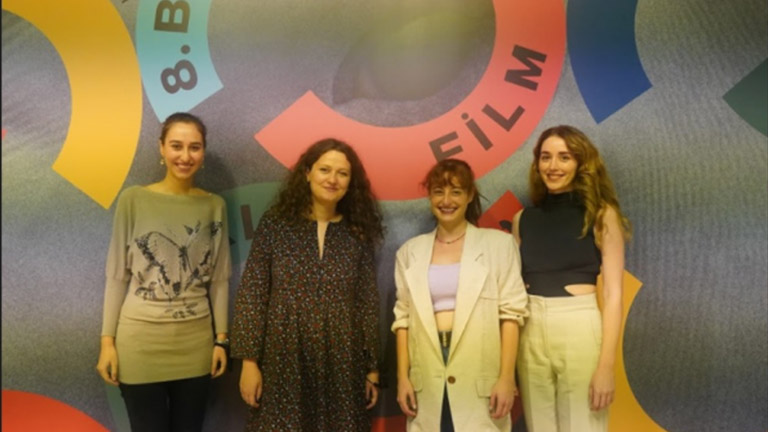 Having hosted cinephiles throughout the week at the movie theatres with the slogan #AgainstAllOdds, 8th Bosphorus Film Festival had its seventh day with the screenings of National Short Fiction Competition films with the attendance of film crews. And within Bosphorus Film Lab; industry section of the festival, Work in Progress Jury Presentations created enthusiasm. Winners of “Golden Dolphin” will be announced at the closing and award ceremony to be held tonight.

All National Short Fiction films; Binbir Gece / The Thousand and One Nights, Büyük İstanbul Depresyonu / The Great Istanbul Depression, Lal, Münhasır / Uniq, Tapınak / Temple and Toz Olmak / Turning to Dust were screened yesterday at Beyoglu movie theatre at 13.00. Following the screenings of Mahsum Taskin’s Binbir Gece / The Thousand and One Nights, narrating the story of Seyithan, a little boy who lives in a village in Sirnak, whose life changes reading the book 1001 nights as a gift from his teacher; Zeynep Dilan Suren’s Buyuk Istanbul Depresyonu / The Great Istanbul Depression, focusing on the short, but lingering period of time for Didem and Ayse, two young women living in Istanbul; Gokalp Gonen’s Lal, portraying a creature born with a word coming from nothing; Yesim Tonbaz’s Münhasir / Uniq, narrating the story of Fazilet, who, feeling alone having lost her young daughter to a fatal disease, goes on a pursuit with a package handed to her at her daughter’s funeral; Murat Ugurlu’s Tapinak / Temple, focusing on the story of Mevlut; a night watchman in a container park whose life changes with mysterious nightly visits of a bus; Huseyin Aydin Gursoy’s Toz Olmak / Turning to Dust, displaying the story of Elif, an employee working in France with her husband, who has conflicts in returning to Turkey in terms of a better future for her son; the film crews met with the audiences. Q&A was moderated by Ali Demirtas.

The first Q&A following the screenings was realized with Zeynep Dilan Suren and lead actors Kubra Balcan and Nazli Bulum. Noting that at the start of the project, she could not imagine the outcome, but one thing she was sure was the film would focus on a recently graduated, jobless person, the director said that the scriptwriting phase took very long. Indicating that the production process lasted for three days in July, Suren mentioned that one inspiration source was her own life. And the lead actor Nazli Bulum emphasized that the film portrays not only young and new graduates, but at the same time the crisis many women and artists are going through and said “What is important is that it touches people.”

Second talk of the day was with Serkan Tastemur; lead actor of Toz Olmak / Turning to Dust. Mentioning that he found a very powerful woman’s story in the screenplay, something which he was very impressed with, Tastemur stated that he finds, as an actor, characters who do not comply with the human nature very interesting. Noting that the production process was very joyful, Tastemur pointed that directors are very friendly and they trusted in and gave freedom to all the actors.

“To Erase the Time Period, I Shot “Temple” on Black & White”

Another Q&A was made with director Murat Ugurlu, producer Buke Aksehirli and the crew of the film Tapınak / Temple. Stating that the film idea sparked to the moment he saw a photography in an exhibition ten years ago, the director said that black & white quality of the photography also urged him to make the film and added “We can see the film not based on concepts, but rather on atmosphere. Regarding the question “Why did you make the film on black & white?”, Ugurlu answered as to erase the time period, he shot “Temple” on black & white. Confessing that the production process was not easy one, producer Buke Aksehirli stated that they spent sufficient time needed for a feature on this short.

Gokalp Gonen, director of Lal, also answered the audience questions. Indicating that he started to write the script ten years ago, the director mentioned that he had waited for a long time to make the film, but because it includes various fight scenes, he delayed for long years. Noting that the film consists of two layers, Gonen said that these layers are “lal” and “isolation”. Stating that the film focuses on how the unhealthy relations lose the balance after a while and brings isolation and how this isolation makes us forget to communicate and lose ourselves, Gonen said that this was exactly his own experience.

“Uniqueness of the Human Beings Led me to Make “Uniq””

Director Yesim Tonbaz, producer Ekrem Aydin, and actor Burak Haktanir and the film crew of the film Münhasır / Uniq, also answered the audience questions. Indicating that she was interested in the issue of the uniqueness of human beings for a long time and this was a determining factor in making this film. “Uniqueness of the human beings is a very special issue,” said Tonbaz, and mentioned that a denture cannot be buried, hence it is a correct metaphor for the uniqueness, as it becomes useless after the person dies and this metaphor has given the opportunity to construct the story around the mother.

““The Thousand and One Days” Emerged with My Own Childhood Memories”

The last Q&A was with the director & screenwriter Mahsum Taskin, cinematographer Semih Yildiz and editor Erhan Ors of the film Binbir Gece / The Thousand and One Days. Mentioning that they made the film in a village in Sirnak and it lasted for six days, the director said that his childhood memories had triggered the story. Emphasizing that transportation and finding a child actor was a hard process, Taskin said that the production process was easier than they had expected.

All National Short Fiction films; Derinlik Algısı / Perception of Death, Geri Dönüşüm / Re-transform, Kismet, Konuşma / Don’t Talk, Yağmur, Şnorkel ve Taze Fasulye / Rain, Snorkel and Green Beans and Yara / The Hurt were screened yesterday at Beyoglu movie theatre at 15.30. Following the screenings of Alperen Albayrak’s “Derinlik Algısı / Perception of Death”, portraying the story of Ferhan; a young and successful swimmer who aims to break her mother’s record and her edgy days because of some health issues; Elif Hamamci’s “Geri Dönüşüm / Re-transform”, depicting an extraordinary event experienced by a gravedigger who can’t help wondering about his own death every time he digs a hole; Emre Sert and Gozde Yetiskin’s “Kismet”, depicting a young woman whose bargain she makes with her father in order to marry her lover leads to the exposition of the skeletons in the family closet; Volkan Girgin’s “Konuşma / Don’t Talk”, depicting the detachment of a boy who has been ordered to talk and not to by his parents in his different ages; Yavuz Akyildiz’s “Yağmur, Şnorkel ve Taze Fasulye”, a micro-projection, through the relationship of a father & son, of the non-communication, alienation and dependency among people; and Onur Guler’s “Yara / The Hurt”, depicting the story of Bahar, a doctor who, after receiving a phone call during her son’s birthday, leaves for an old man’s home to prepare a death report and her resulting dilemma; the film crews met with the audiences.

“We Don’t Interfere Our Ego When Making Film”

The first Q&A following the screenings was realized with Emre Sert and Gozde Yetiskin; directors of the film Kismet. Mentioning that they are friends since childhood, Emre Sert said that they have been making films together for the last ten years with Gozde Yetiskin. Noting that the story has been inspired by true events, Sert stated that the story of the manager and his wife is the story of his own mother and father. Answering the question regarding the lack of light in the film as well as the dark tone, the director said that it was a conscious decision and a necessary choice to create the atmosphere. And sharing his opinions on their feelings on co-direction, Sert said “We don’t know how to make a film alone. Making a film together is just awesome. We don’t interfere our ego when making a film.”

Second talk of the day was with with Yavuz Akyildiz, director of the film Yağmur, Şnorkel ve Taze Fasulye / Rain, Snorkel and Green Beans. Regarding the question if the single location was a risky choice, Akyildiz said that he chose single location because of the budget issues, however on the contrary, it was a rather expensive production. Emphasizing that the relation between the form and content also necessitated the single location, he mentioned that he tried to create a cinematic meaning between the opening and ending.

“I Hadn’t Known Even How to Swim Before the Production”

Another Q&A was made with director Alperen Albayrak, and actors Ipek Sobutay and Sara Meric Cinbarci of the film Derinlik Algısı / Perception of Death. Stating that the idea of the film has not emerged in a single moment, the director said that he made the film with the question of what would happen if a daughter quarrels with her family. And the lead actor Ipek Sobutay noted that before this film, she even had not known how to swim, however at the pre-preduction period, she worked with professional swimmers, something which was hard for her and the most challenging scenes of the film was the swimming scenes.

Director Onur Guler, producer Betul Gunay and cinematographer Turgay Safak also answered the audience questions. Stating that the film arose out of his sensivity towards social and sociological issues rather than personal matters, Onur Guler said that because of the actors’ schedule and financial issues, they had to shoot the film in 14 hours. Also sharing information on setting the communication with the actors, the director said that he accessed them completely on his own, and the actors agreed to take role after reading the screenplay.

The last Q&A was with director Volkan Girgin of the film Konuşma / Don’t Talk. Indicating that the film conveys his message, the director answered the question regarding what kind of a perspective the film should be approached with as “The audiences can interpret the film from their own point of views.” Noting that they realized the pre-production phase during the pandemic, Girgin said that after the restrictions were ended, they finished the production in two days. Mentioning that most of the actors are his friends from neighborhood, this made him more comfortable at the film set.

“Gölgeler İçinde / In the Shadows, a National Feature Competition title, was screened yesterday evening for the second time at Kadikoy movie theatre. After the screening of the film, the talk was attended by the director of the film; Erdem Tepegoz and the film crew. Indicating that philosophical or science fiction genres are proper for questioning issues, as is the case in this film, Tepegoz noted that he came up with this film by delving into the depths of this questioning. Specifying that they made the film in a mining town in Georgia, Tepegoz emphasized that the most challenging aspect was the location. Tepegoz also mentioned that he has always considered the story as a social realistic one, and hence constructed the screenplay accordingly.

This year, seven projects competing within Work in Progress category were judged by Bernd Buder, programme director of Film Festival Cottbus and Programme Advisor of Berlinale Forum; Anne Delseth, a member of Selection Committee of both Cannes Film Festival Directors’ Fortnight section and Locarno Film Festival; and Serdar Can, General Manager of CGV Mars Distribution. One project within the platform will be the winner of TR Ministry of Culture and Tourism Special Award worth 25,000 TL and one project will be the winner of CGV Mars Distribution Award. Winning projects will be granted their awards at the closing ceremony of Bosphorus Film Festival to be held tonight.

Best of 8th Bosphorus Film Festival will be Announced Tonight

One director vying within National Feature Film Competition will be granted with “FILM-YON Best Director Award” by the Jury of Film Directors Association. To grant this award for the first time this year, FILM-YON jury members are Mehmet Eryilmaz, Melisa Onel and Selim Evci.