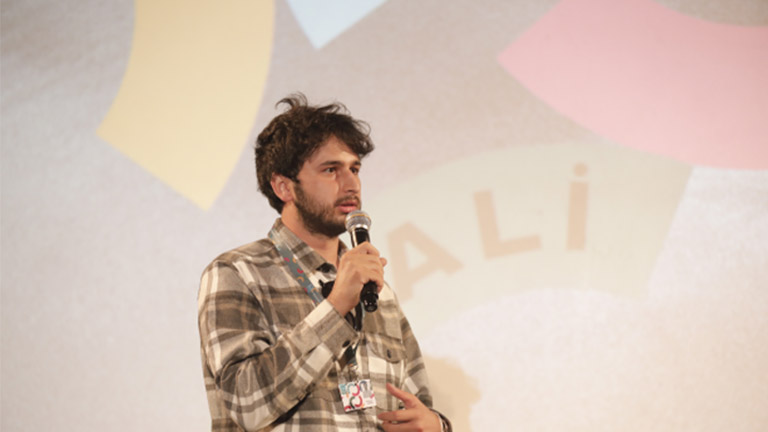 The sixth day of 8th Bosphorus Film Festival had the ongoing competition excitement with the screenings of National Short Documentary Competition films with the attendance of film crews. And within Bosphorus Film Lab; industry section of the festival, Pitching Platform Jury Presentations created enthusiasm.

All National Short Documentary Competition films; Bisikletçi / Cyclist, Bu da mı Gol Değil? / Offside Again?, Seval and Sürgünde Bir Yıl / A Year in Exile were screened yesterday at Kadikoy movie theatre at 13.00. Following the screenings of Melih Aslan’s Bisikletçi / Cyclist depicting the story of a young cyclist having his first marathon race and learning to dream a life beyond a South African town; Kamil Kahrama’s Bu da mı Gol Değil? / Offside Again?, sharing with us the story of Azize, who becomes a licensed football player at the age of 48 after a lifetime of chasing her dream of being a football player; Ahmet Kecili’s Seval, the portrayal of a woman, who, having never lost her childish innocence despite all the hardships, lives a humble life with her father and her cat in Aladag mountains of Adana; Malaz Usta’s Sürgünde Bir Yıl / A Year in Exile, depicting the first year in Istanbul of a lonely and young Syrian refugee, the film crews met with the audiences. Q&A was moderated by Ali Demirtas.

“Few People Can be as Determined as Azize”

The first Q&A following the screenings was realized with Bu da mı Gol Değil? / Offside Again?’s directors Feyzi Baran and Kamil Kahraman and cinematographer Vedat Oyan. Indicating that he decided to make the film after a news clip he’d seen, Baran said that they finished the shootings in nine months in three seasons. Stating that they made this documentary with the aim of making known the life story of Azize, the director said that the production period was quite exhilarating. And the film’s cinematographer, Vedat Oyan specified that he had been very impressed from Azize’s story, since not everybody in her age can be this determined. Noting that they have also consulted Azize in some issues such as music and location, Oyan said that they realized the shootings in a mutual decision.

“Filming Her, We Became Close Friends with Seval”

Second talk of the day was with Seval’s director Ahmet Kecili. Stating that Sevil is his childhood friend’s aunt, Kecili mentioned that after he learned about her story, he decided to make this film. Indicating that he first shared this documentary idea with his friend, Kecili noted that his friend told him not to get his hopes up, but as he insisted on asking for pictures, they got eased off. “At the beginning of the production, there was some sort of distance between Seval and us, but within time, we mutually became fond of each other,” said the director, and noted that they still have contact with her.

“This Documentary Portrays Not Only Me, But All the Immigrants”

Another Q&A was made with Malaz Usta; director of Sürgünde Bir Yıl / A Year in Exile. Mentioning that he came up with the idea to shoot his daily life when he first came to Turkey, Usta said that he began to film his daily life and his documentary consists of short clips from every day. Specifying that production and editing lasted for a year and a half, Usta said “This documentary portrays not only me, but all the immigrants.”

“Thanks to My Bicycle, I met Lots of People and This Documentary Emerged”

Melih Aslan, director of Bisikletçi / Cyclist also answered the audience questions. Indicating that he decided to make the film in South Africa, where he spent a year, the director mentioned that he had not known anybody at first, but then Cape Town’s ghettos attracted his interest and he met with lots of people thanks to his bicycle. Specifying that the filming process lasted for three months and a half, Aslan noted that the dining scenes are made on purpose, as the sincerest and warmest images occur in the dining table.

All National Short Documentary Competition films, Aşık Feymani  / Minstrel Feymani, Baraka / Shack, Donuk Bakışlar / Glassy Stares and Yaylacı / Transhumant were screened yesterday at Kadikoy movie theatre at 15.30. Following the screenings of Ozgenur Gulerce’s Aşık Feymani, portraying the life of 77-year-old Turkish folk poet Osman Taskaya, one of the last living representatives of the Cukurova minstrel tradition; Muhammed Emre Ozdemir and Hakan Demirel’s “Baraka / Shack”, narrating the story of people who feed pigeons in the ghettos of Adana; Feyzi Baran and Ridvan Karaman’s Donuk Bakışlar / Glassy Stares, an ecstatic insight into truth amid the fogs of schizophrenia, a story of brotherhood where the subjects mingle with each other; and Fatih Ertekin’s Yaylacı / Transhumant, tracing the highland culture of the Georgians who are living in the Imerhev region of Shavshat. Q&A was moderated by Ali Demirtas.

“People Have Prejudices Against Feeding Birds”

After the screenings, the first filmmaker to appear in front of the audiences was Muhammed Emre Ozdemir, the director of Baraka / Shack. Indicating that he made the documentary in the neighborhoods of Adana, the city where he was born and raised, the director noted that this made easy for him to create atmosphere. Specifying that plenty of people have prejudices against accomplished or aspiring bird-feeders, Ozdemir said that he wanted to feed birds as a child, but he did not get permission of his father, therefore he could not realize his dream. Noting that intimacy among neighbors is still active in Adana neighborhoods, Ozdemir emphasized that this also was reflected in a positive way in the filming and the film set was very joyful.

“Minstrel Feymani has been Documented for the First Time”

“As I Spent My Childhood in Uplands, I Had Full Command of the Core of the Story”

The last Q&A following the screenings was with Fatih Ertekin; director of Yaylacı / Transhumant. Answering the question regarding the advantages of being the producer, screenwriter, cinematographer and editor of the documentary, Ertekin specified that because he spent his childhood in uplands, he knows the uplands residents very well, an advantage that exempted him from the pre-production period. Specifying that he knew the core of the story from the start, therefore his main consideration was the narration to present it to the audience, Ertekin pointed that when he showed the documentary to the upland residents, everyone found something in relation to themselves.

This year, pitching platform projects, selected out of 96 applications were judged by Per Eirik Gilsvik; Project Manager of SØRFOND; a film production fund administered by the Norwegian Film Institute in co-operation with Films from the South Festival; Frederic Boyer; Artistic Director of Les Arcs European Film Festival and Tribeca Film Festival, and Faruk Guven; TRT Co-productions and Foreign Productions Manager. One project within the platform will be the winner of TRT Co-production Award and one project of Postbiyik Color Correction Award. Winning projects will be granted their awards at the closing ceremony of Bosphorus Film Festival to be held on October 30, Friday.

October 29, Thursday at the Festival

And at Kadikoy movie theatre, cinephiles will be watching at 13.00 and 15.30 International Short Fiction Competition films. And at 18.00, Bandar Band will be shown. And Gölgeler İçinde / In the Shadows will be screened at 21.00 with the participation of the film crew.

Additionally, festival followers can access detailed info and festival catalogue at www.bogazicifilmfestivali.com and screening details are accessible at the festival’s social media accounts.