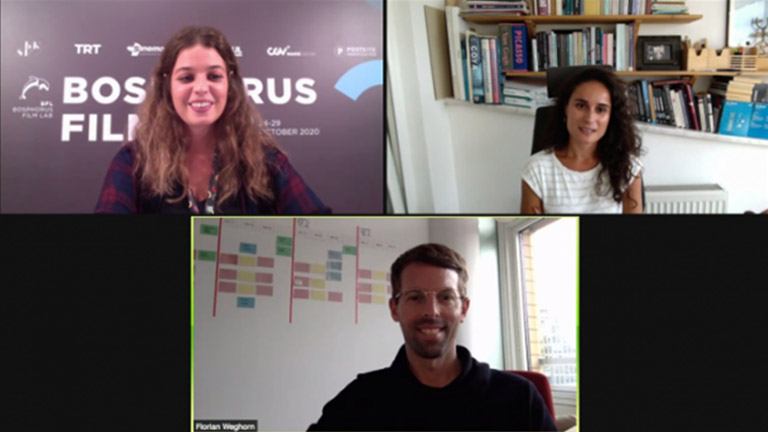 Organized by Bosphorus Culture & Art Foundation with the contribution of Republic of Turkey Ministry of Culture and Tourism, General Directorate of Cinema, and support of Global Communication Partner; Anadolu Agency, within 8th Bosphorus Film Festival – to continue until October 30 – the fourth day of Bosphorus Film Lab brought together the participants within talks and presentations where various industry topics were discussed and professionals from different fields shared their perspectives.

“My Works are Entirely Based on My Instincts”

Starting by answering the question about being an interdisciplinary artist working at podcast, film, video and theatre, Gizem Kizil indicated that what is important for her is creating works. Mentioning that whatever she wants to make, she delves into that field, Kizil specified that she works instinctually. Sharing her creativity process, she gave examples from her work and said “Whatever the issue or question preoccupies me at the moment, I focus on it, hence my work relates to that issue.” Emphasizing that today, technical equipment is easily accessible, even a smart phone can be used to make a short or feature, Kizil said “Therefore, what is important becomes your idea and how you convey it.” Indicating that the new generation closely follows each development and they are also eager to create, Kizil said that this will make a great contribution to the creative diversity in the future. Specifying that her job being directing, she feels her works are not verbally strong as they are visually, Kizil indicated that she develops creative methods in designing a project file and makes visual works based on her perspective.

“We Lose Track of What We are Writing”

Second event of the day was the presentation A New Perspective for Film Projects by Antoine Le Boss, Founding Partner and Artistic Director of Less Is More, a platform founded for supporting and training the talents and creative individuals in their project development. Le Boss shared the tools to employ the limitations as a driving force in the process of writing.

Sharing information about Less Is More platform, Antonie Le Boss indicated that this is a screenwriting development programme where they have both a series lab and also a lab for the films to attend in film festivals. Mentioning that the idea to found the platform emerged four years ago, Boss emphasized that the main objective of the platform is giving support to the independent filmmakers and as the projects are created in difficult conditions, they need to be enhanced. Noting his care for independent cinema, Boss said “Independent films should hold a certain place, otherwise cinema would be pointless.”

Sharing also information on LIM, Boss said “LIM is actually a driving force,” and indicated that screenwriters accomplish to tell stories and learn to write better leaning on this principle. He emphasized that thanks to the studies they make with the researchers, they try to establish the best projects to be produced. Stating that by courtesy of LIM, they provide the means for the screenwriters to work together, which is a significant accomplishment; Boss mentioned that working in close contact is a must for an efficient creative process.

Indicating that screenwriters experience troubles in their writing processes, which is normal, Boss emphasized that one of the biggest mistakes is losing track of the writing. “We need to test our brains and ideas,” said the experienced consultant and emphasized that learning to write is the greatest contributor in the production process.

Boss mentioned that although the application deadline has been over by the start of this week, they will extend it for the applications from Turkey until November 1, Sunday.

“When You Go to a Festival, You Don’t Become a Good Director, You Just Gain Experience”

And yesterday’s third event was realized in the cooperation with Berlinale Talents. A platform that hosts creative persons from around the world with an impressive programme, Berlinale Talents’ Programme Director Florian Weghorn and Sinem Altindag; a producer who was selected to Berlinale Talents programme before, where she presented her project, talked about Exploration of Local Talents and discussed the talents in Turkey and also the processes local talents go through in becoming a part of the global cinema network.

Answering producer Sinem Altindag’s questions, Florian Weghorn first gave answer to the question “What is a talent for the platform?”. Stating that the question, having many aspects, is a very complicated one, Weghorn pointed out that they find it more appropriate to include filmmakers who have made a few shorts and have a sort of experience, rather than very young people. “When you go to a festival, you don’t become a good director, you just gain experience,” said Weghorn, and regarding the question on talent, he indicated that they have soft criteria and talent is all about the reflection in the audience and their most important criterion is to let the interaction with the audience be felt.

At the proceeding minutes, Weghorn gave even more detailed information on Talents Programme. Stating that they invite attendees from thirteen different fields where they discuss subjects such as storytelling, script development and production, Weghorn specified that they do not suggest the participants to attend solely in their own fields. “We are contributing in the development of successful talents,” said Weghorn and emphasized that in the world of Talents, that’s how interactive relationships emerge.”