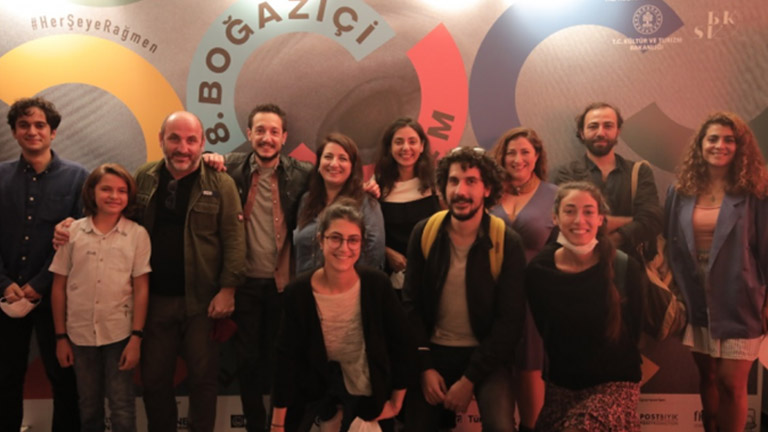 At the fifth day of 8th Bosphorus Film Festival, “Ölü Ekmeği / Food for Funeral”, “Kumbara / Penny Bank” and “Mavzer / Mauser”, all National Feature Competition films, were screened for the second time to the cinephiles’ high interest.

A National Feature Competition film, Ölü Ekmeği / Food for Funeral was screened yesterday at Kadikoy movie theatre at 15.30. After the screening of the film that had its world premiere at 32nd Tokyo Film Festival and based on the story of a poet-singer and his disciple, director of the film, Reis Celik and the film crew met with the audiences. Answering questions regarding the film’s title, Reis Çelik expressed that he was inspired by the title of the book “Ölü Ekmeği”, written by his close friend; Dursun Akcam. Celik also emphasized that in developing the film, he was fueled by the traditions he is a part of.

Ferit Karol’s Kumbara / Penny Bank, a National Feature Competition title, was screened yesterday at 18.00 at Kadikoy movie theatre. After the screening of the film based on the story of Orhan, an ordinary family man, and his relationship with his family during troubled times, the film’s director Ferit Karol, lead actors Murat Kilic and Gulcin Kultur Sahin and the film crew met with the audiences. Noting that he had been inspired from his own life writing the screenplay, Karol said that he has worked on his debut feature for almost eight years, which was an enormous effort. He also indicated that he was friends with all the crew members, which comforted him even it was his debut feature.

Fatih Ozcan’s Mavzer / Mauser, a National Feature Competition title, was screened yesterday at 21.00 at Kadikoy movie theatre. After the screening of the film which had its world premiere at 26th Sarajevo Film Festival and based on the story of a man willing to buy a mauser to protect his sheep from the wolves and his relationship with his son and brothers; director of the film, Fatih Ozcan, lead actors Serhat Kilic and Ozan Celik answered the audience questions. Indicating that the story is based on the land where he was born and raised, Ozcan mentioned that at the beginning, he gave plenty of consideration on whether he can work with wolves, however having learned about the opportunities, he took the first step. And the lead actors, Serhat Kilic and Ozan Celik mentioned that the most challenging part in the production process was the difficult natural conditions and despite the hardships, they made the best film they could.

October 28, Wednesday at the Festival

Sixth day of 8th Bosphorus Film Festival will have the screenings of the films within National Feature Film Competition, International Feature Film Competition, National Short Documentary and Galas sections. In Beyoglu movie theatre, Ordinary Justice will be screened at 13.00, The Island Within at 15.30, Wildland at 18.00 and There Is No Evil at 21.00.

Additionally, festival followers can access detailed info and festival catalogue at www.bogazicifilmfestivali.com and screening details are accessible at the festival’s social media accounts.