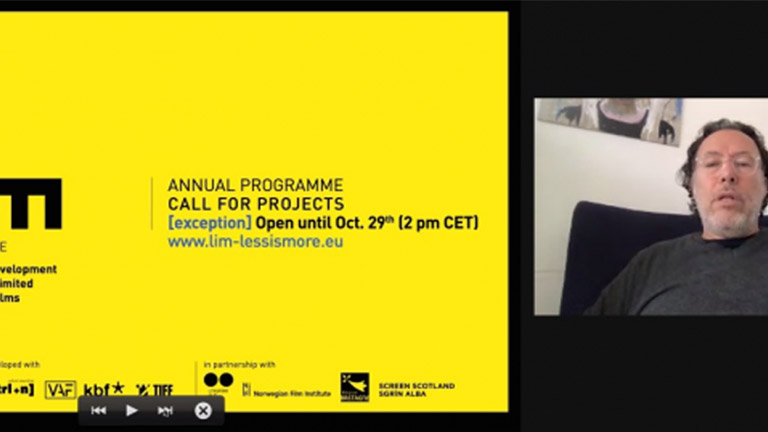 Bosphorus Film Lab had another day brimming with events

Organized by Bosphorus Culture & Art Foundation with the contribution of Republic of Turkey Ministry of Culture and Tourism, General Directorate of Cinema, and support of Global Communication Partner; Anadolu Agency, within 8th Bosphorus Film Festival – to continue until October 30 – the third day of Bosphorus Film Lab had an intense time with presentations, meeting events and Instagram live videos.

First event of October 26, Monday was the presentation Audience Design for Films: Go Digital, where Film Marketing Strategist Joanna Solecka gave information on the vast opportunities social media offers for film marketing and from niche targeting to tailor made messages, how digital is revolutionizing film promotion as well as how it contributes to finding audiences.

“It is Crucial to Understand What You Expect from Audiences”

Giving essential information on film marketing strategies, Joanna Solecka mentioned that several factors should be considered in audience design strategies. Emphasizing that it is very important to understand and convey elements such as strengths, story, and targets of the film, Solecka mentioned that commercial and festival films have different, specific strategies. “It is crucial to understand what you expect from audiences,” said Solecka and pointed out that the determining elements such as the ways audiences reach the films and the ways to employ social media are effective in strategies of hooking the audience.

Underlying that all the film campaigns evolve and therefore it is part of the process to follow the results, Solecka mentioned that social media gives the option to employ different tools, hence it helps to have varied results and data. “Our main target is to have a meaningful communication,” said Solecka, and indicated that approaching in a correct way to the interest groups will bring success to the strategy. Emphasizing that one of the easiest and most effective methods for the film promotion is opening a social media account, the experienced strategist made a warning regarding these accounts should be opened six months in advance, and they should be made interesting with frequent posts.

“We Consider Plenty of Factors in the Evaluation of the Projects”

Sorfond Project Manager Per Eirik Gilsvik, a Pitching jury member, first answered questions about Sorfond Production Support Fund. Telling about the necessary conditions for making an application, Gilsvik said that the fund has a global scale and they consider plenty of factors in the evaluation of the projects. A programmer also for Films from the South Festival, Gilsvik specified that when selecting the films, they consider the audiences and opt for the stories that are proper for everyone as the festivals need audiences.

Another member of Pitching Jury, Frederic Boyer first answered the question about the responsibilities and expectations of the artistic director. Indicating that generally the same kind of films are being screened in European film festivals, in contrast in Tribeca Film Festival, they attend to select different films. Noting that it is a fun process to select the films for the festival, during which they watch hundreds of films having different stories, Boyer said “We watch the films together as the festival team, and we reach a common decision.” Indicating that being a distributor or sales agent does not bring an advantage when selecting films for the festival, the jury member said “Main issue for me is the film’s ability to express Itself” and concluded that they make the selection based on the subject matter, how the story told and also the production value.

“There are No Good or Bad Films, what is Important is the Issue the Film Wants to Convey”

Selection Committee Member of Cannes Film Festival Director’s Fortnight section and Locarno Film Festival, Anne Delseth first talked about how a selection committee member works and also about the selection criteria. Noting that Cannes Film Festival’s selection process has a different system compared to the other film festivals in the world, Delseth indicated that the festival receives around 2000 feature film applications each year. Specifying that for the festival that kicks off in May, they start to work intensively in February and they organize the programming until the end of April, and in addition she noted, they explore films being a jury member in the film festivals organized around the world, or at the markets such as Bosphorus Film Lab. Mentioning that the film selections are also related to the identity of the festivals, Delseth said “There are no good or bad films, what is important is the issue the film wants to convey” and emphasized that the films should be addressing a current issue.

Bernd Buder; Cottbus Film Festival Programme Director and Berlinale Forum Consultant was the other Work in Progress jury member attended the talk. Indicating that they visit the national festivals, as well as film markets when creating the programme of Cottbus Film Festival, Buder specified that when they really like a film, they invite the director. Emphasizing that their aim is bringing together the films of both master directors and young talents, Buder also specified that they aim at creating friendship among the directors and the industry professionals as well. Making significant explanations regarding the attendance of the projects in markets, he emphasized that the first- or second-time directors should be careful not to attend in more than two or three markets, and the projects should be finished in several years at the longest.

And the third -and last- event of October 26, Monday was realized at the festival’s Instagram account with the attendance of editor Ayris Alptekin, who answered at the live video the questions of Bosphorus Film Lab director, Ipek Tugay.

“For a Successful Film, Harmony Between the Director and Editor is Important”

Regarding the question of how she gets involved in the projects, Ayris Alptekin held a different approach. Mentioning that she doesn’t expect that the aesthetical style or imagination to match with her own, Alptekin emphasized that even if they have contrasting ideas, she can give creative contributions if a project excites her. “I tend to be avid to work with people who excite me,” expressed Alptekin and continued her speech by talking about her working methods in editing. Emphasizing the importance of the harmony between the director and editor giving examples, she mentioned about her notes she takes during editing process and also the different names she gives to situations.

First event on the fourth day of Bosphorus Film Lab will be realized at the festival’s Instagram account. Guest of the Instagram live video to be held between 12.00-13.00 will be screenwriter and director Gizem Kizil and she will answer Bosphorus Film Lab director, İpek Tugay’s questions.

Tomorrow’s second event will be the presentation to be held between 15.30-16.30 by Antoine Le Boss, Manager Partner and Artistic Director of Less Is More, a platform founded for supporting and training the talents and creative individuals in their project development. In his presentation A New Perspective for Film Projects, Le Boss will teach us to employ the limitations as a driving force in the process of writing.

And tomorrow’s third -and last- event will be realized between 17.00-18.00 with the cooperation of Berlinale Talents. A platform that hosts creative persons from around the world with an impressive programme, Berlinale Talents’ Programme Director Florian Weghorn and Sinem Altindag; a producer who was selected to Berlinale Talents programme, where she presented her project will talk about the Exploration of Local Talents and discuss the talents in Turkey and the processes local talents go through in becoming a part of the global cinema network.

Participants can access the events from the links present under Special Events tab at www.bogazicifilmfestivali.com.