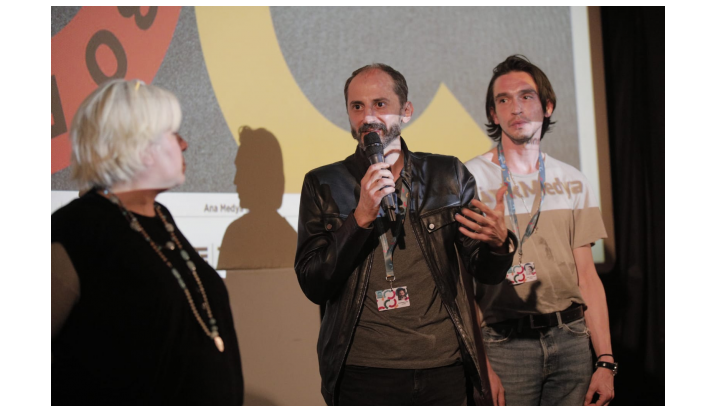 At the fourth day of 8th Bosphorus Film Festival, “Gelincik / Weasel” and “Gölgeler İçinde / In the Shadows”, two of the National Feature Competition finalists, were screened to be followed by the talks with the film crews.

National Feature Competition enthusiasm continued yesterday as well. On the fourth day of the festival, Orcun Benli’s Gelincik / Weasel” and Erdem Tepegoz’s “Gölgeler İçinde / In the Shadows” had screenings to be followed by talks with the film crews. Istanbulite audiences had the chance to see both titles for the first time at 8th Bosphorus Film Festival.

“We Made this Film with Collective, Voluntary Work”

Orcun Benli’s Gelincik / Weasel, a National Feature Competition title, was screened yesterday at 18.00 at Beyoglu movie theatre. After the screening of the film based on the story of Ayhan, a young ex-policeman and his struggle to adapt himself to his new life in a forest house while waiting for his daughter to arrive, director of the film, Orcun Benli, actors Ahmet Mumtaz Taylan, Kaan Yildirim and Inan Ulas Torun and producers Bulut Reyhanoglu and Sukru Uçpinar met with the audiences. Q&A was moderated by Artistic Director of Bosphorus Film Festival, Emrah Kilic.

Sharing information about the writing process first, Orcun Benli noted that he had designed the project long time ago and it took six months just to edit the film. Mentioning that he has always considered making an independent picture, Benli said that he made it at the first opportunity.

Ahmet Mumtaz Taylan, playing “Karadayi” character mentioned that he was involved in the project right at the screenwriting stage and said “I tried to encourage Orcun and Sukru in the writing phase.” Pointing out that it is not possible to find great resources for such films despite the script is very good, Taylan said that they succeeded in making this film thanks to the courage and energy of the crew. Also sharing his thoughts on his character, Taylan said having a dark side and finding no way out, his character attempts to confront with the world though he cannot confront with himself.

One of the producers of the film, Bulut Reyhanoglu mentioned that one of the most interesting aspects of their film is that they had no support. “As a producer, I think good stories should be told,” said Reyhanoglu and noted that the film was realized on a collective, voluntary basis.

Erdem Tepegoz’s Gölgeler İçinde, a National Feature Competition title, was screened yesterday at 21.00 at Beyoglu movie theatre. After the screening of the film based on a skeptical story focusing on the lives of a group of workers in a factory area run with primitive technology in a dystopic world -which had its world premiere at 42nd Moscow Film Festival- film’s director Erdem Tepegoz, producers Umut Ozcorlu and Figen Ermek Ozcorlu and actors Muharrem Bayrak and Ahmet Melih Yilmaz appeared before the audiences. Q&A was moderated by Artistic Director of Bosphorus Film Festival, Emrah Kilic.

“Science fiction is a proper genre for questioning”

The first topic at the talk was the spark of the film. Director Erdem Tepegoz said that his debut feature Zerre, being a social realistic film, connects to Gölgeler İçinde on the subtextual level. Noting his own questioning “What are we living through?”, a question he asked himself based on his readings and watchings, Tepegoz noted that he based the film on his own answer. Pointing out that philosophical or science fiction genres are proper for questioning the human beings’ alienation and other issues, Tepegoz noted that he came up with this film by delving into the depths of this questioning. ”When we talk about science fiction, some clichés come to our minds, however it is a proper genre for questioning,” said Tepegoz and mentioned that going beyond the science fiction clichés, he could deepen the questionings and his thoughts.

Noting that a crew of 200 people have worked for the film, Tepegoz specified that the stone factory area they saw in their first trip to Georgia is still working now. Emphasizing that they had a chat with the factory workers, Tepegoz said that the story of hundreds of workers never leaving their area represents perfectly the closed system that he was trying to convey in the film.

Another speaker was producer Umut Ozcorlu. Mentioning that he decided, after returning from Georgia, he could make a film anywhere in the world, Ozcorlu said that the production conditions were tough and that was exactly what provoked them.

And Koku / Fragrance, a National Feature Competition title, met with cinephiles once more at Kadikoy movie theatre. After the screening, the film’s directors Baris Gordag and Yasin Cetin and film crew attended the talks.

October 27, Tuesday at the Festival

Fifth day of 8th Bosphorus Film Festival will have the screenings of the films within National Feature Film Competition, International Feature Film Competition and Galas sections. In Beyoglu movie theatre, My Salinger Year will be screened at 13.00, Focus, Grandma at 15.30, The Best is Yet to Come at 18.00 and Sun Children at 21.00 will be screened.

And at Kadikoy movie theatre, cinephiles will be watching There Is No Evil at 13.00. Ölü Ekmeği / Food for Funeral at 15.30, and Kumbara / Penny Bank at 18.00, and Mavzer / Mauser will be screened at 21.00 with the attendance of the film crews.

Additionally, festival followers can access detailed info and the festival catalogue at www.bogazicifilmfestivali.com and screening details are accessible at the festival’s social media accounts.