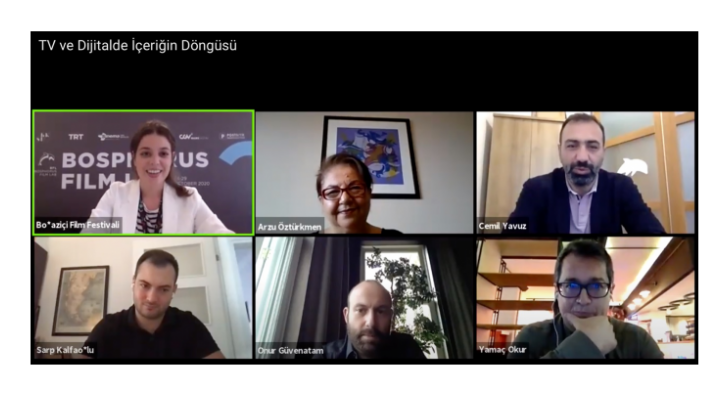 Organized by Bosphorus Culture & Art Foundation with the contribution of Republic of Turkey Ministry of Culture and Tourism, General Directorate of Cinema, and support of Global Communication Partner; Anadolu Agency, 8th Bosphorus Film Festival – to be held until October 30 – discussed various industry topics with outstanding guests at the second day of Bosphorus Film Lab.

First live video talk of October 25, Sunday was realized at the festival’s Instagram account with the attendance of the acclaimed producer Zeynep Atakan. At the live video, Atakan answered Bosphorus Film Lab director; Ipek Tugay’s questions and shared her experiences & observations regarding being a producer.

“Those who have completed their screenplays assume they have finished the project, but it is not a correct perspective,” said Zeynep Atakan and she also emphasized that the film should have been designed before the writing process and it should be developed with a holistic approach. Underlining the necessity that the project owner should keep working with real producers during the entire process, Atakan likened the relation between the producer and director to a long marriage.

Emphasizing the need to have a file for each project, she specified that after preparing the file, it is a must to establish a strategy together with the producer and said “The project file should be expressing you and your project. Furthermore, you should have full command over your project. The most important part is to be able to express yourself and the message you want to convey.” Regarding the question “How should a good producer be?”, Atakan mentioned that “a good producer” should be someone who faces all kinds of challenges, understands the director correctly and draws a road map for her, finds financing, convinces the investors, designs the economy with correct strategies and creates a partnership with the people she works with.

“Most Important Task in Broadcasting is Maintaining Continuity”

First speaker to talk about the audience habits changing with the pandemic and share his opinions on the cycle of content in TV and digital was TRT 1 Channel Coordinator, Cemil Yavuz. Specifying that the first institution stopped working at the sets was TRT, Yavuz noted that serious precautions were taken at the channel and the staff started to work from home. Specifying that during the process, in order not to lose the audience, the series Seksenler, Kalk Gidelim and Tutunamayanlar were remotely produced, Yavuz said “During the pandemic period when people stayed at home, we, TRT has expanded our archives. As we did not make rating-oriented programs, our ratings have been dropped but this did cause no anxiety for us.” Summarizing the most important target in broadcasting as “maintaining the continuity”, Yavuz noted that TRT is in the process of establishing its own digital platform and gave the good news that they will be setting the digital platform presumably before the end of 2021.

“Pandemic Reflected the Haste and Anxiety to the Screen”

Another speaker; CEO of OGM & producer Onur Guvenatam mentioned that at the beginning of pandemic, producers concentrated on shooting stock video and he experienced that this was a mistake, because the haste and anxiety at the set was reflected on the screen. “I don’t see any difference between those made for digital or channel. What is significant is the content of the project,” said Guvenatam and while producing the content, the producer should ask himself the question “Will I be able to impress the audience?”.

BluTV Drama Manager Sarp Kalfaoglu started his speech by making explanations regarding the changing audience habits due to pandemic and the rising of the digital. “We could not have a commercially sustainable process, but despite this, number of subscribers at the digital platforms seriously increased during the pandemic,” said Kalfaoglu, and mentioned that this was the biggest advantage of the pandemic. Emphasizing that pandemic has been a teacher for all of us, Kalfaoglu said that it has been easier to think about new content models when working from home. Giving information about the functioning and systems of the digital platforms, he concluded; “In platforms with subscription systems, you have to provide contents that feed people’s curiosity and that they cannot find in other mediums. Therefore, you need to produce interesting content to keep the audience.”

Another panel speaker was producer Yamac Okur. Noting that the production processes have changed to a great extent with the recent conditions, they had the opportunity to deal more with the development of projects and in this period, and audiences showed a great interest in the digital. Emphasizing that correct, quality content that can successfully touch the audience will find its place whether in TV channels or digital platforms, Okur said that TRT formed in this period a new order with its new contents in the rating system. Specifying that audience profiles should not be ignored when producing the contents, Okur concluded; “Audiences for TV and digital are so alike. If the content is good, audiences will watch it on TV as well. In our country, televisions are still powerful and apparently, they will continue to be. As producers, we should take more risks and we need to differentiate the contents and invest in the screenwriters.”

Bosphorus Film Lab, industry section of the festival will present three events throughout the day to the industry professionals. First event on October 26, Monday will be realized between 11.00-12.00. In Audience Design for Films: Go Digital presentation, Film Marketing Strategist Joanna Solecka will give information on the vast opportunities social media offers for film marketing and from niche targeting to tailor made messages, how digital is revolutionizing film promotion as well as how it contributes to finding audiences.

Tomorrow’s second event will be Meet the Juries, to be realized from 16.00-18.00. The event will bring the international jury members of both pitching and work-in-progress platforms to the audiences. Following the pitching jury members; i.e., Per Eirik Gilsvik; Project Manager of SØRFOND and Frederic Boyer; Artistic Director of Les Arcs and Tribeca Film Festival; Work in Progress jury members; Bernd Buder, Programme Director of Connecting Cottbus and Advisor of Berlinale Forum and Anne Delseth, a member of Selection Committee of both Cannes Film Festival Directors’ Fortnight section and Locarno Film Festival will have the opportunity to answer Bosphorus Film Lab director, Ipek Tugay’s questions and share their expertise.

Participants can access both of the events from the Zoom link present under Special Events tab at www.bogazicifilmfestivali.com as well as on Bosphorus Film Festival’s official Youtube channel.

And the third -and the last- event of tomorrow will be realized at the festival’s Instagram account. Guest of the Instagram live video to start at 19.00 will be the awarded editor Ayris Alptekin.