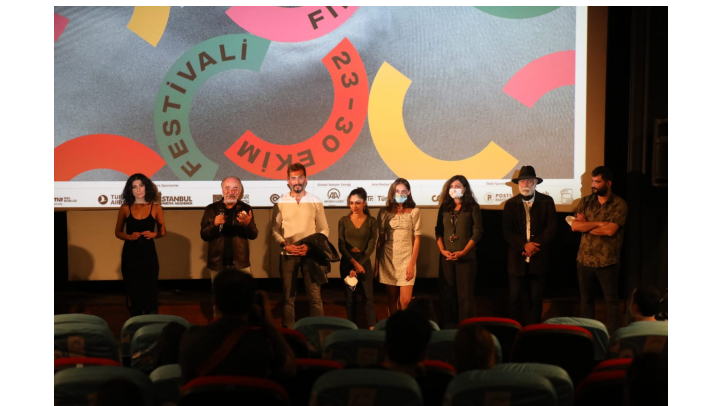 Fatih Ozcan’s Mavzer / Mauser, a National Feature Competition title, was screened yesterday at 15.30 at Beyoglu movie theatre. After the screening of the film which had its world premiere at 26th Sarajevo Film Festival and based on the story of a man willing to buy a mauser to protect his sheep from the wolves and his relationship with his son and brothers; director of the film, Fatih Ozcan appeared before the audiences. Q&A was moderated by Artistic Director of Bosphorus Film Festival Emrah Kilic.

Meeting with the audiences after the screening, director Fatih Ozcan first told about how the production process started. Specifying that he was conscious about why he chose this topic and his desire to tell about the land he is already familiar with, Ozcan mentioned that the story includes wolves as they symbolize the humans’ ambition to annihilate others.

Having written numerous series, Ozcan noted “In the film, you should be showing something to the audience, but that something needs to promise beyond what you tell. It should promise another world attracting the audience to the depths, to the film universe. The most difficult part is to find this promise at the text itself. You don’t have such a problem when writing a series.”

Answering one of the most wondered questions of the talk, Ozcan noted that the film casted wolves coming from abroad together with a professional crew and mentioned that they shot the film in difficult conditions at less than -15 degrees in high altitudes without harming no living beings. Ozcan also noted that the casted wolf had played in 255 films before.

Reis Celik’s Ölü Ekmeği / Food for Funeral, a National Feature Competition title, was screened yesterday at 18.00 at Beyoglu movie theatre. After the screening of the film based on the story of a poet-singer and his disciple, that had its world premiere at 32nd Tokyo Film Festival, director of the film Reis Celik and actors met with the audiences. Q&A was moderated by Riza Oylum.

Starting his speech by telling about the story of the film, Reis Celik told that they started the process with Tuncel Kurtiz. “Based on a word, I convinced Tuncel Kurtiz to make the film. He asked me why we were making this movie, and I said the villager poet-singers created great legends with one word, and let’s get inspired by them,” said Celik and also noted that while looking for locations for a movie he made nine years ago, he shot a picture of his friend together with an apple he put on an ice lake and this image sparked the idea in his mind.

Answering the questions about the production process, Celik mentioned that they had a tough process. Despite the fact that Ardahan generally becomes arid at the end of August, that year the land was all green, which was a real problem at the pre-production process. Regarding the question whether it was difficult to work with children, director said “I can’t say it was hard for me. I love my actors at their most possible natural state. I have never let the children memorize their roles. I took them out of that artistic mode. I tried to make the film letting it to go with the life flow.

Ensar Altay’s Kodokushi, a National and International Feature Competition title, was screened yesterday at 18.00 at Kadikoy movie theatre. After the screening of the documentary film based on the story focusing -on the basis of a Japanese tradition- on the story of Norihito; a cleaner who is specialized in cleaning the apartments of the lonely deceased and elderly Muramatsu who is in search of a reason to exist; director of the film, Ensar Altay, cinematographer Kursat Uresin and members of the crew, Omer Faruk and Merve Dag appeared before the audiences. Q&A was moderated by Murat Tirpan.

The first speaker at the talk following the screening was director Ensar Altay and he noted that the film is based on real events. “I was very impressed by the lonely deaths of elder people who were left to their loneliness”, said the director and noted that he was also impressed by the news at New York Times, so he wanted to tell a story about it. Emphasizing that he was shocked by where the humanity was dragged to by the modern life, Altay continued as follows: “Especially in Tokyo, there are at least 45 cleaning companies that are specialized in cleaning the apartments of lonely deceased and they earn well, because the rates show about 4 or 5 thousand weekly lonely deaths. We were shocked to witness the events in Japan and we made this film.”

Confessing that the production process was at times very challenging both materially and spiritually, director of the film mentioned that they went to Japan for four or five times for the production, which was an exhausting process. Emphasizing that Japan is not a familiar land and the language and culture were the most problematic aspects, Altay said “Everything you see at the film is real” and also specified the locations were very challenging as well and it was unavoidable not to be affected. Noting that they made the film in various phases in about a year, Altay said that it took that long to find and shoot the stories that convey the correct message.

“Women Spend Too Much Effort for All”

Ahmet Sonmez’s Sadece Farklı / Just Different, both a National and International Feature Competition title was screened yesterday at 21.00 at Beyoglu movie theatre. After the screening of the film based on the story of a high-functioning autistic father and his "normal" son, the film’s director Ahmet Sonmez, screenwriter Nalan Merter Savas and actors Omer Akgullu, Vildan Atasever and Aybars Kartal Ozson appeared before the audiences. Q&A was moderated by a Programmer of Bosphorus Film Festival; Ebubekir Elkatmis.

Specifying that the story is based on the reversal of his own experiences with his son, Ahmet Sonmez said “You want to make a film based on your own experiences and these films emerge.” Noting that such subjects are always hard to tell, Sonmez mentioned that they made a film based on a real, yet rarely seen condition, which makes the film special. “Society in general is not familiar with autism. It is a rare condition. We wanted to tell a story about it and tell it in a different way,” said Sonmez and noted that screenwriting, financing and casting processes required much effort.

Regarding the question “How has it felt to act an individual with autism?”, the lead actor of the film, Omer Akgullu said that everybody at the film set was very tolerative of him and he had contact with nobody and he was completely introvert. Director Ahmet Sonmez also noted that the crew, including himself, showed utmost attention not to contact Akgullu, in order to have his best acting performance. The other lead actor, Vildan Atasever answered the question regarding her character as follows: “I tried to empathize by dwelling on what women go through in their marriage, in their relationships. I think we women spend too much effort for all. And sometimes I feel we don’t get understood at all,” and noted that the film also witnesses that everything transforms at the house after the woman leaves.

And the young actor of the film, Aybars Kartal Ozson said that he put himself in the shoes of the people with autism and then afterwards he started to think about how he can help them. “My character was a kid, but in the film, I became the father, and my father was my kid and I took care of him,” said Ozson and noted that it was a very different experience for himself. And the screenwriter of the film, Nalan Merter Savas noted that she knows no individual with autism, however, the writing process was an exploration for her.

Nasipse Adayız / You Know Him Met with the Audiences in Kadikoy

Nasipse Adayız / You Know Him, a National Feature Competition title, was screened for the second time at the festival yesterday at 15.30 at Kadikoy movie theatre. After the screening, the film’s director & screenwriter, Ercan Kesal, producer Yamac Okur and actor Muttalip Mujdeci connected via phone under the moderation of Murat Tirpan and answered the audience questions.

October 26, Monday at the Festival

Fourth day of 8th Bosphorus Film Festival will have the screenings of the films within National Feature Film Competition, International Feature Film Competition and Galas sections. In Beyoglu movie theatre, Zana will be screened at 13.00. And Kodokushi at 15.30, Gelincik / Weasel at 18.00 and at 21.00 Gölgeler İçinde / In the Shadows will be screened with the participation of film crews.

And at Kadikoy movie theatre, cinephiles will be watching The Best is Yet to Come at 13.00. Sadece Farklı / Just Different at 15.30, and Koku / Fragrance at 18.00 will be screened with the participation of the film crews. And The Courier, a Galas title will be screened at 21.00.

Additionally, festival followers can access detailed info and the festival catalogue at www.bogazicifilmfestivali.com and screening details are accessible at the festival’s social media accounts.