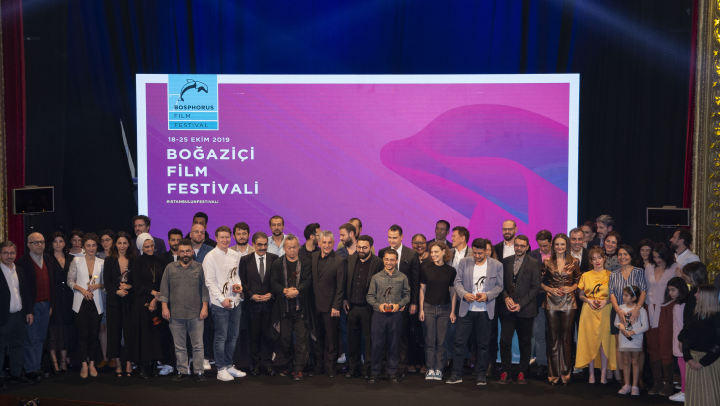 Winners of 7th Bosphorus Film Festival have been announced!

At the closing-award ceremony held in Beyoğlu Ses Theatre, “Aidiyet” by Burak Çevik has been selected as the Best Film at the national feature competition, winning the Golden Dolphin Award worth 100,000 TL. And at the international competition, Ukrainian director Nariman Aliyev’s “Homeward” has been selected as the Best Film. In addition, the winning projects of Bosphorus Film Lab have also been announced. The ceremony has been presented by Ebru Akel.

Having hosted numerous guests, Korean master director Kim Ki Duk has been presented with Honorary Award at the ceremony that hosted numerous guests. The opening speech has been made by Ogün Şanlıer, the Head of the Festival, who said “It was an unbelievable week. The screenings were full. Our panel talks, masterclasses have been thrilling. And that was what we exactly wanted. We are happy to accomplish our desire” and thanked the guests for attending.

Organized with the support of Republic of Turkey Ministry of Culture and Tourism, TRT as the Institutional Partner, Anadolu Agency as the Global Communication Partner and Türk Medya as the Institutional Communication Partner, 7th Bosphorus Film Festival was concluded with the award ceremony held tonight (October 25). Bringing to the Istanbulite cinephiles the latest productions not only from Turkey, but from throughout the world, this year a total of 83 films from 25 countries have been showcased and numerous master filmmakers met in Istanbul as festival guests including Brillante Mendoza, Parviz Shahbazi, and Kim Ki Duk.

The first award of the ceremony has been the Honorary Award presented to the Korean master director Kim Ki Duk. Having received his award from Ogün Şanlıer; the Head of the Festival, the master director declared his appreciations and said, “First of all, I am happy to be invited by this precious festival. Thank you so much. I would like to thank the audiences for seeing and enjoying my films. Especially, yesterday’s masterclass was a delight for me. I would like to thank for this award as well. I will try harder to create new films. I would like to congratulate you all for this beautiful festival.”

Chaired by the director Mahmut Fazıl Coşkun, and composed of members; actress Cemre Ebuzziya, screenwriter, art director and photographer Ebru Ceylan, author Mustafa Çiftçi and actress Nalan Kuruçim, National Feature Film Competition Jury has selected “Aidiyet” directed by Burak Çevik as the best national film of the year. Having received his award from Ebru Ceylan, Çevik said:” Sometimes I ask myself for whom I make my films. Indeed, I make them neither for festivals, critics nor awards. I make them to sleep better at night, to see longer and more beautiful dreams. And I would like to thank this brave jury for attending in my dream.”

Erkan Erdem won Best Editing Award with the film “Kovan”. For FIYAB Production Award worth 10,000 TL, debut and sophomore film producers were judged and Seyid Çolak was selected as the producer of the year with the film “Kapan”.

This year, the International Feature Film Competition’s Golden Dolphin Award worth 50,000 TL has gone to the director Nariman Aliyev’s “Homeward”.

In addition, Adriana Matoshi, Rozafa Celaj, Shengyl Ismaili and Melihate Qena have won the Best Actress Award for their performances in “Aga’s House”, and Akthem Seitablayev has been selected as the Best Actor for his performance in “Homeward”. Besides, Jury Special Award has gone to Lendita Zeqiraj for her film “Aga’s House”.

Awards worth a total of 70,000 TL have been provided to the national and international short film competition of the 7th Bosphorus Film Festival. Short Fiction Film Competition Jury, composed of Nazlı Eda Noyan and Agron Domi, selected “Boşluk” for the national, and “Nefta Football Club” for the international competition as the Best Short Fiction Film. And Short Documentary Film Jury, composed of Zeynep Gülru Keçeciler, Fırat Sayıcı and Mohammed Siam selected “Amca” for the national, and “Superhero Without Superpower” for the international competition as the Best Short Documentary. Additionally, “Nefta Football Club” won Ahmet Uluçay Grand Prize worth 25,000 TL. And the winner of Istanbul Media Academy Young Talent Award worth 5,000 TL has been the short film “Avarya” by Gökalp Gönen.

Support for the national film industry!

The winners of Bosphorus Film Lab, organized with the institutional partnership of TRT have also been announced.

As announced by Mustafa Alcan, TRT Vice President, TRT Co-production Award given at the Pitching category has gone to “Kar ve Ayı”. And Postbıyık Color Correction Award has been given by the co-founder of Postbıyık, Yalın Özgencil to the project “İlk Taşı En Dertli Olan Atsın”.

At the category of Work in Progress, Erkin Yılmaz, Director of Cinema presented Ministry of Culture and Tourism Special Award worth 25,000 TL to the project “Mavzer” by Fatih Özcan, and CGV Mars Film Distribution Award was presented by Firuzan Koçak, Content Purchasing Manager of CGV Mars Distribution, to Hacı Orman’s “Körleşme”.