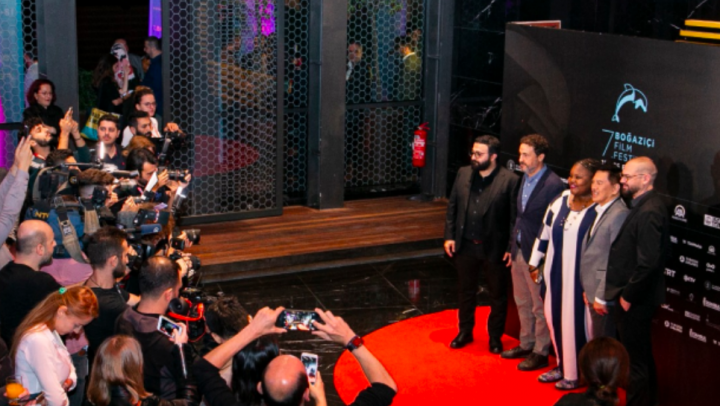 Bosphorus Film Festival, seventh edition of which is being organized this year, kick-started with the opening night organized at Grand Pera Emek Hall.

Organized with the support of Republic of Turkey Ministry of Culture and Tourism, General Directorate of Cinema, TRT as the Institutional Partner, Anadolu Agency as the Global Communication Partner and Türk Medya as the Institutional Communication Partner, 7th Bosphorus Film Festival’s opening speech was realized by the President of Bosphorus Film Festival, Ogün Şanlıer.

Şanlıer started his speech by emphasizing that the Bosphorus Film Festival has covered a long distance in a short while, becoming a solid festival.

Declaring the foundation of Bosphorus Foundation for Culture and Arts, with the aim of moving Bosphorus Film Festival to even higher ranks and providing further contributions to the culture and arts of our country, Şanlıer stated that Turkey has much to do in terms of culture and arts and they will work hard to contribute to the industry.

And the Artistic Director of the festival, Emrah Kılıç opened his speech by mentioning about this year’s festival poster featuring seven dolphins symbolizing their seventh edition and bringing the color tones of the Bosphorus sea and sunset.

Underlining that this year’s motto “Istanbul’s festival” is an attempt to identify the festival with the city of Istanbul, Kılıç emphasized that inspired by Istanbul itself, Bosphorus Film Festival is Istanbul’s festival.

Mentioning about the “7” selection prepared for the seventh edition, Kılıç indicated that they will be celebrating the seventh edition with David Fincher’s cult film “Se7en”, a story about a serial killer’s murder of the committers of the 7 deadly sins with his own methods; Ingmar Bergman’s “Seventh Seal”, a 1957 film regarded as one of the most important films of the film history, and Akira Kurosawa’s peak of his career, “Seventh Samurai”, a 1954 production.

The director of the unforgettable films, Mendoza acknowledged to feel honored to have received the award and mentioned his appreciation of the Turkey Cinema and filmmakers from Turkey. Festival President Ogün Şanlıer presented the award to Brillante Mendoza.

“The Specials” as the Opening Film

Following the speeches and the award ceremony, the opening night continued with “The Specials”, directed by Eric Toledano and Olivier Nakache duo, and starring the famous actor Vincent Cassel, which was the closing film of 72nd Cannes Film Festival as well.

Having hosted various actors, directors and producers; the opening ceremony was presented by Irem Şentürk, the general coordinator of the festival.