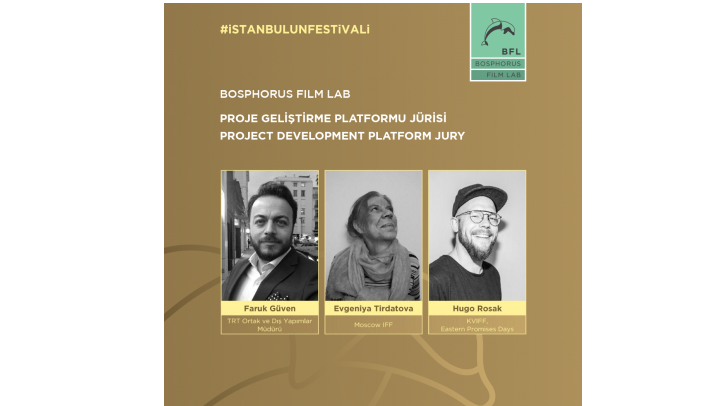 To be organized during October 19-24 as the industry side of 7th Bosphorus Film Festival, with the aim of providing contribution to the production of feature films, Bosphorus Film Lab reveals the selected projects.

In addition, the participants will attend in the workshops to be held during 19-24 October with the film professionals, and will develop their projects in terms of co-production, pitching and preparing financial plan.

Organized with the institutional partnership of TRT, with the aim of contributing to the development of the films from Turkey, and creating financial and moral support for the young directors and producers, this year’s Bosphorus Film Lab’s selection is;

And the selected projects for the Work in Progress category will be evaluated by Bianca Taal (IFFR Rotterdam), Serdar Can (CGV Mars Distribution General Man-ager) and Emma Boa (Edinburgh IFF), where two projects will be presented with 25,000 TL worth T.R. Ministry of Culture and Tourism Special Award and CGV Mars Film Distribution Award.

This year’s selection of Work in Progress category:

Selection of First Cut Lab has also been announced!

3 projects selected to the First Cut Lab, a workshop programme designed to de-velop the feature film projects in editing phase in accordance with the interna-tional standards, are also revealed:

First Cut Lab will be realized on October 19-24.

Tickets are on sale at BiletiniAl!

Organized by International Bosphorus Cinema Association and Istanbul Media Academy, 7th Bosphorus International Film Festival will run this year from Octo-ber 18-25 in Istanbul and the screenings will take place in Atlas, Beyoğlu and Kadıköy movie theatres.

Just To Bring Everyone to Films!